Since 2013 Gemini Eye Clinic has been utilizing Amaris 1050RS, an excimer laser for the surgery of eye disorders with an unsurpassed repetition rate. The laser was put into operation as the first of its kind in Europe and as the third in the world (after Hong Kong and Oman). The laser delivers to the eye over 1,000 laser pulses per second, which is four times as many pulses delivered by the Zeiss MEL80 laser and twice as many pulses delivered by Alcon WaveLight lasers. The higher repetition rate results in the shortening of the time necessary for surgery. This acceleration further improves the patient’s safety and the quality of the surgery performance as the exposure of the eye to the effects of the ambient environment during the surgery is minimized. The previous laser attained only 75 % of the rate of the new Amaris 1050 laser. 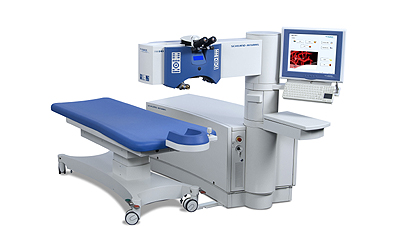 The laser tracks the eye micro-movements in the course of the surgery and also compensates for their effect on the precision of the laser surgery being performed.

The compensation of the eye micro-movements is further improved by the function enabling analysis of the movements expected to occur in the nearest moments. The laser analyses all movements of the eye and creates a mathematical model based on which it is possible to foresee the immediately following movement of the eye. The laser thus prepares itself in advance for the expected correction of the eye movements to come.

Using the laser, it is possible to remove all eye disorders such as myopia and hypermetropia, as well as astigmatism. Gemini Eye Clinic is the best equipped eye clinic for laser eye surgery in the Czech Republic.